In early 2020, Safety Resources, Inc. was contracted by a glass manufacturing facility to provide full-time construction safety management oversight. The facility was going through a “rebuild” of a large furnace and hot end components, a process that occurs every 3-5 years. This facility has multiple furnaces and production lines, and the particular furnace in this case study supports four production lines: two for cured products and two for uncured products. This rebuild project was planned at $17 million and was scheduled to run for 35 days total, from furnace drain to glass production.

The project involved a large number of subcontractor companies as well as corporate and plant staff; A total of over 200 individuals. Trades included masons, electricians, millwrights, mechanics, specialized equipment technicians, and general laborers. The project also included 18 corporate and plant level staff, which managed the various aspects of the project with one Corporate Engineer acting as Project Manager.
With regards to Controlling Hazardous Energy in the Hot End processes, the following numbers identify points required to control the energy for this rebuild:
• Furnace (Electric) - 7 energy sources.
• Forming Sections (4) – 138 energy sources.
• Ovens (2) – 133 energy sources.
• Utilities – 192 energy sources.
Throughout the various stages of the project, numerous components needed checked, tested, and/or adjusted, which required re-energizing those specific sources. Excluding furnace controls, it’s not feasible to utilize mains or even MCCs. Each plant has mapped out all the individual energy source control points for stored energy relative to electrical, hydraulic, pneumatic, and water. Achieving a lockout and verification process involving this many sources and people took a great deal of planning, coordination, and time.

The Owner’s Policy and Procedure was designed and well suited for such an event. Once production ceased on each of the effected lines, one plant-level Project Engineer was tasked with notifying the project team that they could begin the lockout process for all functional areas other than the furnace. Only once the furnace drain was decidedly complete by the Corporate Furnace Engineer could the furnace be verifiably locked out. SUCCESSES
Only the Owner’s project team could apply color-coded, numbered locks to each of the identified energy sources. The lead project engineer for each functional area placed those keys into the Owner Group Lockout Box, which was established utilizing a list of the various lockout points. The Safety Resources’ Construction Safety Manager issued brown color-coded and numbered lock(s) to any prime or subcontractor system for any particular or multiple functional areas. The brown lock was applied to the Owners’ Group Lockout Box with an identifying tag, and lock key was then placed in their company Group Lockout Box, as well as each worker’s individual locks. Throughout the project, these group boxes were consistently audited to ensure the correct contractors were identified and the proper number of worker locks were on the individual company’s group box. 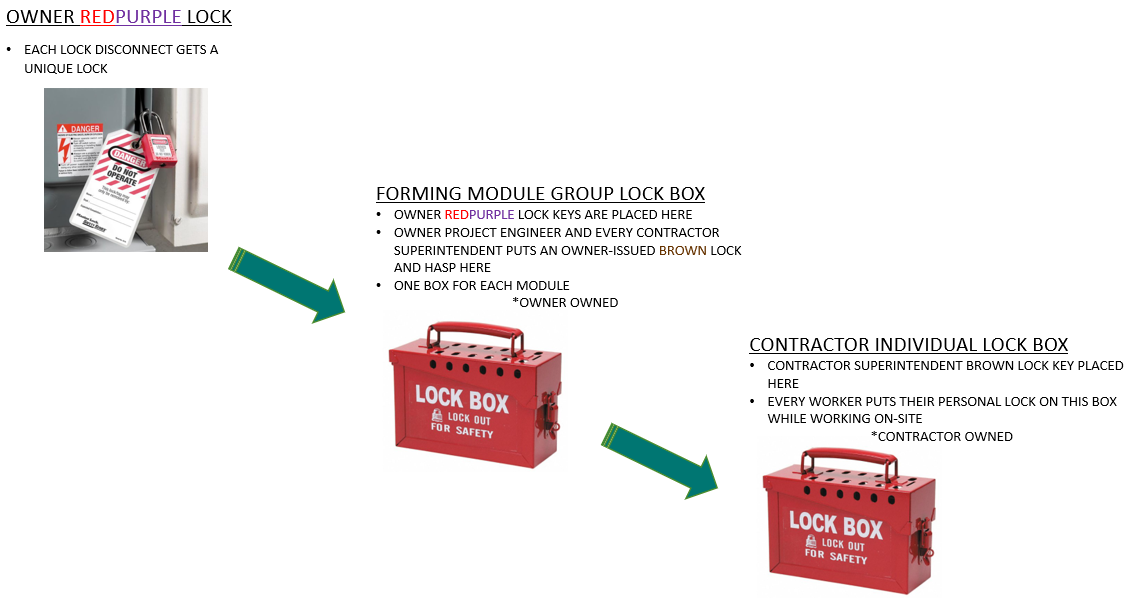 The functional areas began going through the check-out procedure at 90% completion, and production began to ramp up. This is the point when the Project Manager and their respective team made the determination to end the owner’s group lockout box process. This was communicated to all parties during the daily coordination meetings, which allowed for any interferences/conflicts to be identified and managed. As was appropriate at the conclusion of the assigned scope of work, the decision was made and announced that all areas were live, and the local plant Lockout Rules were officially in effect.
Overall, Safety Resources provided independent contractor safety management services to better manage safety compliance within a complex project involving multiple contractors. The result was reduced incident rates while avoiding additional, unrelated costs. Since the inception of this Hazardous Energy Control Process, there were zero accidents related to unplanned/unforeseen released energy or accidental process start up.

WHO: Company Owners, Safety Directors, Project Managers, Facility Managers, Foremen, Supervisors, Superintendents, or anyone else involved in the construction industry, manufacturing industry, service industry, or anyone who shares a common interest in safety.

WHY: Safety Resources, Inc. looks forward to sharing ideas and providing a learning environment to the community in an effort to encourage involvement in occupational safety efforts everywhere. Each attendee will earn an IACET CEU Certificate for 0.2 each time they attend the viritual session!