WORKPLACE SAFETY - WHAT TO EXPECT IN 2019 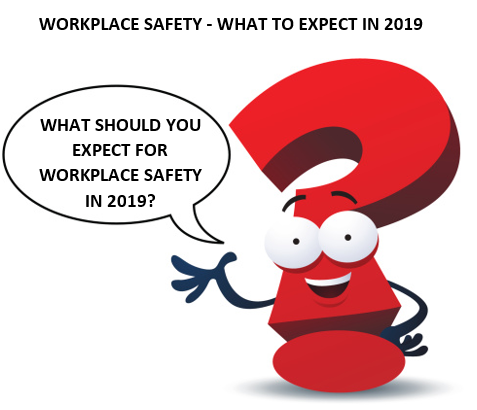 A New Year is upon us and many wonder what to expect from workplace safety and regulators for 2019.

According to an article from JDSupra, dated January 7, 2019, here are 8 areas where we can expect to see action in the months ahead:

Much has been written about how Democratic control of the House of Representatives will lead to more oversight of the Trump administration.  OSHA and MSHA will not be exceptions.  What kind of messages should we expect to hear?

If the past is any guide, last February, when the House Committee on Education & the Workforce held a hearing on OSHA, Committee Democrats wrote, “Congressional Republicans and this Administration have taken numerous actions that are jeopardizing worker safety and health protections...[OSHA] has terminated or suspended work on nearly half of the proposed safety and health standards that were under development, covering toxic chemical exposure, combustible dust explosion hazards and workplace violence in health care facilities.”

Rep. Mark Takano (D-CA), now the incoming chairman of the Subcommittee on Workforce Protections, lamented that it had been nearly two years since the last hearing and said that “[f]ailing to improve workplace safety standards has a high price on workers and their families.”  Given this clear gap between the current OSHA and the new leaders in the House, these issues are sure to come to the fore early and often.

Like many Obama-era rules, the 2016 OSHA injury and illness record-keeping rule still has an uncertain fate.  In 2016, the rule broadly required companies to submit their injury and illness records to OSHA - not just the annual summary of how many incidents, but also their detailed OSHA 300 injury logs and incident reports.  The original plan was that not only would the data be submitted, but it also would be publicly accessible online.

At one point after the administration changed hands, OSHA suggested collecting, but not releasing, the data.  But, groups favoring release of the data made clear that if it was collected by OSHA, they would seek its release through the Freedom of Information Act even if OSHA chose not to publish it.

Amid concerns about privacy and misuse of the data, last May, the Trump administration proposed to roll back the more detailed filings and said it intends to finalize that amendment to the rule this year.  Public Citizen and other groups have sued OSHA to force it to collect the information and make it publicly available.  So far, that lawsuit continues forward after surviving the agency’s motion to dismiss the case.  Expect Congress to get in on the action, too.  Democrats in the House are likely to press OSHA to justify the changes it has proposed.

When the Trump administration began, it suggested that Executive agencies would find it extremely difficult to create new rules.  An Executive Order required the elimination of two existing rules for every new rule created.  One report a year ago suggested that business largely continued as usual, and agencies had found ways to fit most rules into one or more exemptions in the Executive Order.  Indeed, OSHA and MSHA have plenty of items in the rulemaking hopper.

For OSHA, expect the injury and illness record-keeping saga to continue (see above).  In addition, OSHA expects to roll out further amendments on beryllium, as well as cranes and derricks in construction.  On the longer-term horizon, OSHA has its sights set on communication tower safety, protections for emergency responders, powered industrial trucks and workplace violence in the healthcare industry.

In the case of MSHA, the top three issues to watch are probably:  powered haulage, silica and diesel.  Based on repeated comments of senior officials raising concern about safety with conveyor belts and mobile equipment, it seems likely that MSHA will proceed with rulemaking on the broad category of equipment it calls “powered haulage.”  With rising concern about increased black lung disease among coal miners in certain geographic areas, MSHA may well feel compelled to issue new silica exposure rules (potentially related to the black lung issue).  While it’s at it, it may extend such a rule across all parts of the mining industry, especially in the wake of OSHA’s extensive silica rule in 2016.

Since the beginning of the Trump Administration, OSHA’s top position has been vacant.  The current nominee, former FedEx health and safety chief, Scott Mugno, has been waiting for a full Senate vote for well over a year.  In the meantime, Deputy Assistant Secretary of Labor Loren Sweatt has been the acting head of the agency since July 2017.

There have been various rumors at times (as recently as last month) that Mugno’s confirmation vote could become part of a compromise deal to confirm a number of nominees of interest to both parties.  But, so far, the nomination remains in limbo (OSHA is not alone; there are 120 “pending” nominations on the full Senate’s calendar, and a 150 more in committee).  It’s not clear whether there are substantive concerns holding back the confirmation or whether the position has simply become a bargaining chip in larger negotiations between the parties.  Will 2019 be the year when Trump’s OSHA gets an assistant secretary confirmed?

Last month, the Supreme Court agreed to hear a case that may decide whether courts should continue granting significant deference to agencies, like OSHA and MSHA, when they interpret their own regulations.  Under the 1997 Supreme Court case Auer v. Robbins, 519 U.S. 452 (1997), courts defer to an agency’s interpretation of its own regulations unless that interpretation is plainly erroneous or inconsistent with a regulation’s text.  The result is sometimes wide discretion for agencies to roam beyond the accepted meaning of rules they passed through the notice-and-comment public rulemaking process.  Will the Supreme Court rule to constrain agencies more in the future?

#6: YOUR DATA WORKING AGAINST YOU

Alexa isn’t the only one tracking your every move.  At work, our machines and devices are constantly creating and recording data.  What information are you keeping without even realizing it?  Do you have conveyors or machines controlled by computer/PLC?  A fancy control room or dashboard monitoring operations?  What about mobile apps to track product or people?  Do you have apps to measure worker fatigue?  As the Internet of Things grows, and more tools come online in your facility, you are creating and storing infinitely more data.

What stories might your data tell about you, your operations and your people?  What if OSHA or MSHA seeks the data during an inspection or following an incident?  What about parties in litigation getting your data in discovery?  What if hackers get their hands on it?

Your data may have lots to say about the conditions, practices and events at your operations.  Expect enforcement agencies and others to become more sophisticated over time about how your data can help them.  Stay tuned later this year for more advice on how to assess the risk and protect yourself.

Since the end of August, when it lost its quorum, the Federal Mine Safety and Health Review Commission has been running on empty.  Designed as a five-member body of judges, it currently only has two commissioners serving: Mary Lu Jordan and Michael Young.  The other commissioners’ terms expired last year.

President Trump has nominated three individuals to fill the vacant spots: Marco Rajkovich, Bill Althen and Art Traynor.  They are generally seen as a bipartisan “package deal” (two have worked as lawyers for management and one for a union).  But, it’s not clear when they will be considered for confirmation.  Rajkovich was nominated in March and is one of 120 nominees approved by committee but still waiting for full Senate confirmation votes.  Althen and Traynor are among over 150 nominees still waiting for committee review.

In the meantime, the Commission can’t fulfill its main role of ruling on appeals of cases involving MSHA penalties and citations.  The Commission says it can still decide to take a case (which should prevent the case from being appealed immediately to a U.S. court of appeals).

It also assigned the Chief Administrative Law Judge to decide on motions to reopen (these motions are filed where mine operators missed the opportunity to contest or mistakenly paid penalties but wish to contest).  The Commission deals with about 30-40 substantive cases a year.  As it is, an appeal can take months.  If the Senate does not approve new commissioners soon, a serious backlog will develop.

One New Year’s resolution worth sticking to is taking training to the next level.  Now is an ideal time to be sure that your management and facilities are ready to handle challenging safety and health issues in the year ahead.  Keeping liability to a minimum requires preparation.

To read this article in its entirety, please visit JDSUPRA: What To Expect in Workplace Safety in 2019.

For more information on Workplace Safety and Training Solutions, check out our
Safety and OSHA Training section!